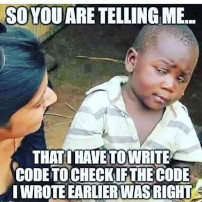 Testing in a GNU Build System project can be done in different ways. In this article we are going to discover a basic testing setup. We will use the protocol-less approach, which only uses the test programs' exit statuses to determine the outcome of tests (success, fail, skipped…).

In order to get started quickly, we will make use of the same project we created in the Getting Started article. If you are new to GNU Build System you might want to go through that article first. Otherwise you can just clone and use the getting-started branch from the support repository.

First of, we are going to create a function to test. To do so, we will create two files. The header file lib.h and the implementation file lib.c. In which we will put the following code.

This test will be skipped since we return 77.

This one is going to fail since it expects foo () to return 1 while it returns 0.

Now, we have to tell Automake to compile those three programs and use them as the test programs. Our Makefile.am would look like this after the modification.

The two first lines are from the Getting Started article. We didn't change that. The TESTS variable should contain the name of all the test programs. XFAIL_TESTS contains the names of the test programs that are expected to fail. check_PROGRAMS variable takes the programs that should be generated before the test begins. And the last three variables footestSOURCES, foo_xfail_test_SOURCES and foo_skipped_test_SOURCES tells Automake the sources that need to be compiled to generate each test program. lib_SOURCES is just a variable that contains the file where the function is defined. I added it just to make things cleaner. We could have used lib.c directly.

Since we added tests for the first time to the project. Autotools need to add something called a test driver. To do so we have run the autoreconf -i command in order to regenerate a new configure script that supports testing.

Time to run the configure script.

To run the test the command is make check. Go ahead and run it.

As expected you can see in test results that foo_test passed successfully, foo_xfail_test was expected to fail and it did and foo_skipped_test was skipped.

If you want you can go ahead and break the function and run the tests again to make sure the tests fail.

You can retrieve the code from the testing branch in the support repository.