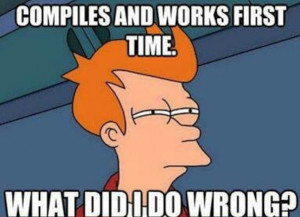 The aim of this article is to get you quickly started with the Autotools. We will learn how to install the necessary tools and the steps to setup a simple "Hello World" project.

There is multiple ways you can choose form in order to install Autotools. The easiest way though, is to use your distribution's packaging system.

In my case, I use Fedora 27. For me installing Autotools was as easy as installing two packages:

The command for doing so, was as follows:

If you are using Ubuntu, it's pretty much the same thing. Your command would look something like this.

Note: If you encounter difficulties installing Autotools, feel free to send me an email. I will do my best to help you with that. This will also help me improve this article.

Setting up a simple project

Now, what I want you to do is to create a brand new directory, and jump into it. For me, I would like to call it hello-world.

And now go ahead and create three empty files inside the directory you just created:

In the main.c file we are going to write a simple "Hello World" program. This is the program I wrote, but you can write whatever your little heart desires.

Now we will concentrate on how we can build this program using Autotools. We'll start by setting up a simple configure.ac.

"Wow" you might say "what the heck is that!". Just relax, don't panic and let me explain.

configure.ac is essentially a shell script. But the commands above are macros. We'll later run commands that will expand these macros and generate an actual shell script.

For more details about these macros you can refer to Autoconf's documentation. Other macros that we didn't use in this example can be found there.

Our first Automake script is as simple as two lines. In your Makefile.am go ahead and write this.

The first line tells Automake that we want to build a program called hello. The second line tells it that the code for that program is in a file called main.c.

Now get back to your command line and if you have Autotools installed correctly, you should be able to call.

This will generate a bunch of files. One of them is a shell script called configure. Go ahead and run this script.

Now you can build the project by running.

If everything went as expected you should have the program hello built in the current directory.

This was a very basic setup. In other articles we will dig deeper into the GNU Build System.

In order to get the complete code, checkout the getting-started branch in the support repository.